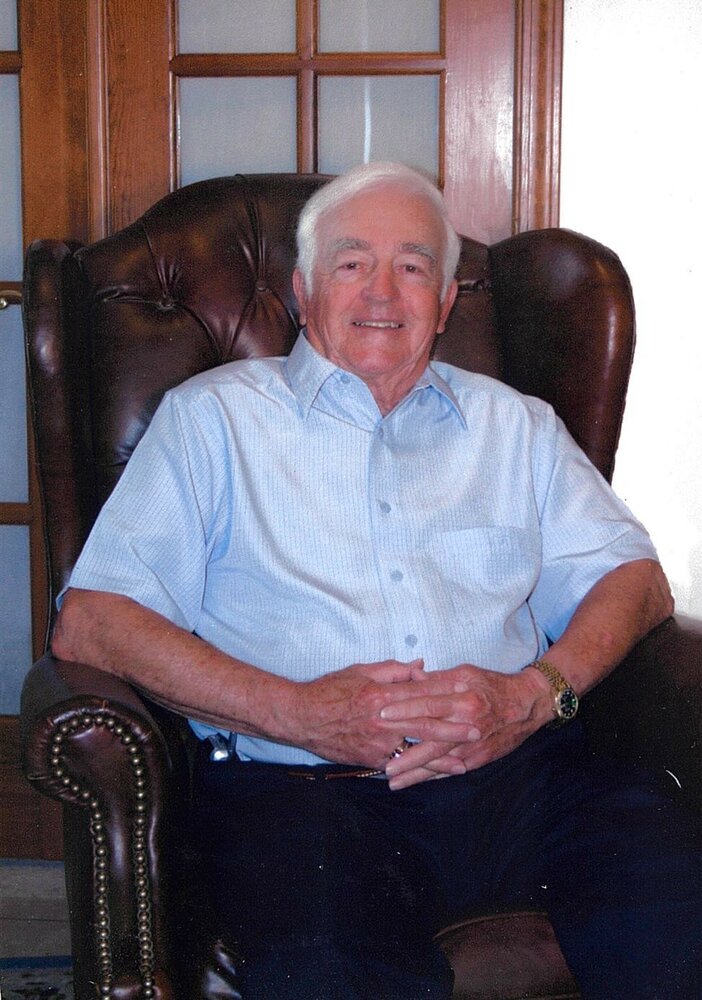 Please share a memory of Calvin to include in a keepsake book for family and friends.
View Tribute Book
Atkinson- Calvin E. White, 96, passed away peacefully on April, 23, 2022, in his home with his son, Don, by his side. He was born in Worcester, MA, on July 17, 1925, the son of Emerson White and Ora Bagley of Shrewsbury, MA. Calvin graduated high school in 1943, and was immediately drafted into WWII. As a United States Marine Corporal, he served as a radio operator on a DC 3 Air transport. He was deployed to the South Pacific campaign for 4 years. After the war, Cal married his devoted wife of 53 years, Virginia Smith of Westborough, MA. The couple resided in Northborough, MA, where they raised 4 children together. Calvin worked for the U.S. Postal Service for 30 years. After retirement, the couple moved to Atkinson, in 1990, where they lived beside their two sons, Don and Ken White. Calvin and Ginny were avid travelers and snowbirds. They traversed the country in their motor home several times, visiting every state including driving the Alcan Highway all the way to Alaska! They continued traveling south together to Florida, Texas, and Arizona, every winter until Virginia’s death in 2002. Calvin continued to head south during the winter until the age of 90 when he retired to his home in Atkinson for the remainder of his years. Calvin was a member of the Masons for 60 years. His hobbies included camping, canoeing, hiking, bicycle riding (sometimes backwards), traveling, dancing (he especially loved disco music), and he was a lifelong NASCAR follower and fan of Maine’s own, Ricky Craven. Cal took pride in his physical fitness and was devoted to his daily calisthenics and weight lifting routine as well as walking several miles per week up until his health declined at the age of 94. Calvin lived life to the fullest and was indeed a charter member of the “Greatest Generation.” Calvin is survived by his oldest son, Douglas and wife, Therese, of Shoreview, MN; son, Don and wife, Nancy, of Atkinson; son, Kenneth and wife, Irene, of Hartland; daughter, Nancy Axelson and husband, Karl, of Hampton Falls, NH; two beloved granddaughters, Colleen White, (D.M.A.) of Mauldin, SC, and Rita White (D.P.T.)of Saint Paul, MN; and a special sister-in-law, Donna Kluefer of Staunton, VA. Don White would like to express his heartfelt gratitude to all of his siblings for their unconditional love and generous support throughout Dad’s final years. The family would like to give a special thank you to the Beacon Hospice caregivers, Erika, Amanda, and Pam, who gave Calvin exemplary care these past 2 years. Our deepest thanks to Cal’s daily caregiver, Lynne Palmer, LPN, whose kindness and professionalism sustained us all throughout Dad’s decline. Also, a very special mention to Cal’s Saturday companion, Jean Moreno, who always brought her smile and a laugh to Dad’s week. Honorable mention goes out to Cal’s niece Vicki Bridges of Virginia Beach, VA, for the many thoughtful cards and gifts over the years. A graveside service with military honors will be held at 2pm, May 17th, at the North Atkinson cemetery. Arrangements are in the care of Lary Funeral Home. Messages of condolence and memories may be expressed at www.laryfuneralhome.com
Tuesday
17
May

Share Your Memory of
Calvin
Upload Your Memory View All Memories
Be the first to upload a memory!
Share A Memory
Plant a Tree