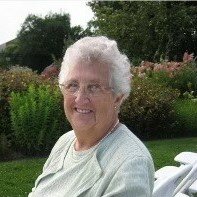 Please share a memory of Barbara to include in a keepsake book for family and friends.
View Tribute Book
Dover-Foxcroft and Bangor - Barbara Louise Andrews Richards, 95, passed away March 5, 2022, after a brief illness. She was born December 12, 1926, in Princeton, Maine, to Ivor and Thelma Carle Andrews. She was step-daughter to Phyllis Tupper Andrews. Barbara’s life was long and well-lived. She was a respected craftsperson, a skilled card-player, a good golfer, and a caring nurse. She was a devoted mother, raising her daughters to be strong and independent. After a family crisis, she and Linwood immediately welcomed Rose and later Edward into their home. Her childhood was spent on the shores of the St. Croix River where she closely monitored the tides, currents, and caves for opportunities for adventure with her siblings and cousins. As a teenager, she packed sardines in Eastport and often reminded her daughters “If you think your life is hard, try being a young woman who smells of sardines!”. Nevertheless, her love of the Maine coast and its seafood is a legacy that lives on through her children and their families. Her last requests for outings were to eat on the water and to “drive down the river”. Her legendary lobster tool chest has been bequeathed to her grandson, Jason. She graduated from Calais Academy, Class of 1945(she attended nearly 70 reunions) and then attended nursing school at Eastern Maine Medical Center. In 1946, her family left Red Beach and moved to an Atkinson potato farm. She left nursing school at that time to help care for her mother and to marry her husband. She worked as an LPN at Mayo Regional Hospital and at Hibbard’s Nursing Home for many years. She was active in Piscataquis County bridge clubs, knitting clubs, and quilt groups for most of her adult life. She and her partners were frequent winners at duplicate bridge and she closely monitored the Piscataquis Observer to ensure their wins were detailed correctly. She and her close friend, Phyllis Smith, were co-founders of the annual Atkinson Quilt Show more than 30 years ago. Many family members still sleep under her quilts and wear her hand knit socks. Barbara and her late husband, Linwood, led an active life of golf, RV travel, snowmobiling, and cards. Their post-retirement decade was spent traveling with the Holiday Ramblers of Maine, covering the Eastern US west to the Mississippi. They spent many winters in Florida. She loved to play games and was especially good at cribbage, bridge, and dominoes. She survived all four of her siblings and was the pillar of a large family circle. Her kitchen table was often surrounded by family and friends telling stories of travel and adventure with lots of laughter, seafood, and dessert. All were welcome and frequent visitors know they were blessed to be part of the family shenanigans. Barbara was predeceased by her husband, Linwood “Wimpy” Richards, and her siblings, Basil Andrews, Patricia McCorrison, Calvin Andrews Sr., and Sara Harvey. Barbara is survived by her daughters, Jo Eaton, Lois (John) Pradka, Fay Richards and her partner, Mark Clark; her niece, Rose (George) Fraser and her family; nephew, Edward Richards, and his family; grandchildren, Jason (Meredith) Eaton, Erin (Don) Harper, Keva (Rob) Crockett, Sarah (Don) Lucas, and Anna (Bryan) Young; great-grandchildren, Gavin and Mya Harper, Dayton and Doria Crockett, Jack, Claire, Emily and Jane Lucas, and James Young; and many wonderful nieces and nephews, and was especially fond of Patricia Smith, Janice Flowers, Marie McCorrison, and Annie Chambers. The family would like to thank the staff at Winterberry Heights Assisted Living Facility in Bangor, Maine for their care and compassion during these last two years of Barbara’s life. A graveside ceremony will take place in the spring, while there will be a celebration of her life this summer. Dates to be forthcoming. Arrangements are made by Lary Funeral Home, Dover-Foxcroft, Maine. Messages of condolence and memories may be expressed at www.laryfuneralhome.com.

Share Your Memory of
Barbara
Upload Your Memory View All Memories
Be the first to upload a memory!
Share A Memory
Plant a Tree