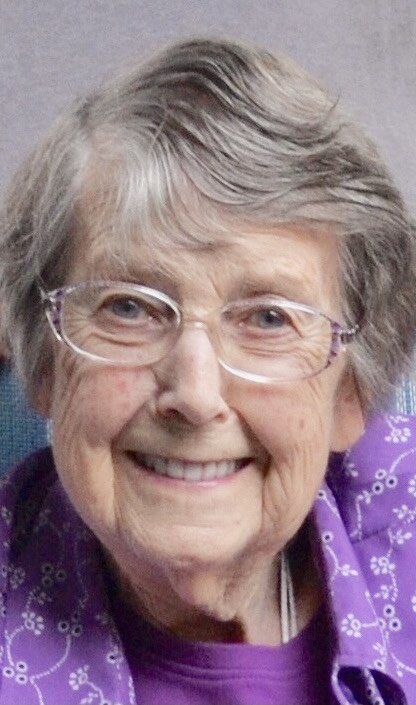 Please share a memory of Carolyn to include in a keepsake book for family and friends.
View Tribute Book
Guilford - Carolyn Ladd Campbell, 91, wife of the late Donald L. Campbell, passed away peacefully on May 8, 2021 at Hibbard Nursing Home. She was born on August 7, 1929, in Dover-Foxcroft, the daughter of Guy and Mary (Noyes) Ladd. She graduated from Guilford High School in 1947, and shortly thereafter she and Donald were married and moved into the family farm in North Guilford where she lived for 62 years before moving to Riverbend Apts in Guilford. Carolyn graduated from the University of Southern Maine in 1979 with a degree in Early Childhood Development. She taught Head Start in Guilford and Sangerville for many years. Following her retirement she was a substitute teacher for SAD #4. She was a member of the Guilford Center Baptist Church serving as treasurer for several years. Carolyn enjoyed spending summers at the family camp at Davis Pond. She was predeceased by her husband, Donald, of 60 years and her sister, Marjorie Frautten. She is survived by one sister, Barbara Reardon of Guilford; three sons, Daniel and wife, Carol, of Hartshorne, OK, Dennis and wife, Deb, of West Chesterfield, NH and Douglas and his wife, Bonnie, of Derry, NH; four grandsons, David, Scott, Chris and Derek; six great-grandchildren and several nieces and nephews. Visiting hours will be held at Lary Funeral Home in Dover-Foxcroft on Tuesday, May 11, from 4 to 6 pm with a 1:00 pm graveside service at Elmwood Cemetery in Guilford on Wednesday, May 12, with the Reverend David LaSalle officiating. In lieu of flowers please send donations to the Guilford Center Baptist Church at PO Box 25, Guilford, ME. 04443. The family wishes to extend many thanks to the staff of Mayo Hospital and Hibbard Nursing Home for the compassionate care she received. Arrangements are in the care of the Lary Funeral Home. Condolences may be expressed at www.laryfuneralhome.com.
Tuesday
11
May

Share Your Memory of
Carolyn
Upload Your Memory View All Memories
Be the first to upload a memory!
Share A Memory
Plant a Tree