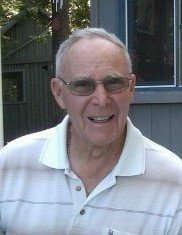 Dover-Foxcroft and Englewood, FL – Edgar Eugene Gammon, 89, passed away peacefully September 10, 2019, at Englewood Hospice House, Port Charlotte, Florida. He was born February 13, 1930, in Westfield, the son of Thomas G. and Dora (Trueworthy) Gammon. Gene was a graduate of Foxcroft Academy, Class of 1947, and the University of Maine, Class of 1951. A proud member of the U.S. Army, Gene served on active duty from 1951-1953, and with the Maine Army National Guard until 1973, retiring with the rank of Lieutenant Colonel. Gene owned and operated Rowell’s Garage in Dover-Foxcroft from 1954-1995.  He was always giving back to his community and his industry; Gene served as a director and as President for the Maine Automobile Dealers Association and on the Foxcroft Academy Board of Trustees for 19 years. He volunteered for many civic organizations, was involved in town government, and was actively involved in the Dover-Foxcroft Kiwanis Club for 55 years serving as President and Lieutenant Governor of the local district and Governor of the New England District, Director for the New England District Foundation, and Chairman of the Investment Committee. He also served as Advisor to the Key Club for 8 years, and as the Finance Advisor for New England District Circle K. He enjoyed traveling, making furniture, golfing, and spending his summers on Sebec Lake.

Gene was predeceased by his wife of 53 years, Shirley Rowell Gammon; two sisters, Marjorie and Margaret; and son-in-law, Robert Pomeroy. He is survived by his wife, Winifred (Carter) Gammon of Englewood, FL; two daughters, Linda Gammon of Stone Ridge, VA, and Karen Pomeroy of Dover-Foxcroft; granddaughter, Elyse Pomeroy of South Portland; grandson, Andrew Pomeroy and his wife, Nicole, and their daughter, Lillian of Waltham, MA; two sisters, Doris Coy and her husband, Thomas of Dover-Foxcroft, and Helen Brown of Colorado Springs, CO; Winnie’s daughter, Karen Cole of Dover-Foxcroft; Winnie’s grandson, Derek Cole and his daughters, Alexis and Kaileigh of Parkman; and several nieces and nephews.

The family sends heartfelt thanks to the local hospice services and to the Englewood Hospice House for their compassionate care for Gene over his final days.

A memorial service will be held 2PM Saturday, October 5, 2019, at the Lary Funeral Home, Dover-Foxcroft. Following the service a burial with military honors will be held at the family lot in Rural Grove Cemetery, Dover-Foxcroft. Immediately following the burial the family invites you to join them at Spruce Mill Farm & Kitchen, 920 W. Main Street, Dover-Foxcroft. In lieu of flowers memorial contributions may be made to Foxcroft Academy, Attn: “Building on Tradition” Campaign, 975 W. Main Street, Dover-Foxcroft, Maine 04426. Arrangements are in the care of the Lary Funeral Home. Messages of condolence and memories may be expressed at www.laryfuneralhome.com.

Share Your Memory of
Edgar
Upload Your Memory View All Memories
Be the first to upload a memory!