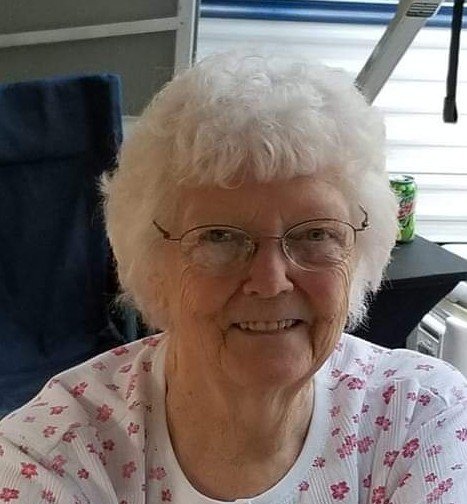 Dover-Foxcroft- Ione R. (Bailey) Rush, 84, passed away peacefully September 3, 2019 after a short illness.  She was born December 2, 1934 in Monticello, the daughter of Glenna M. (Wasson) and Amos O. Bailey.

Ione grew up in Monticello and graduated from Houlton High School in 1953.  She eventually moved to Connecticut and married Alan Rush, who also grew up in Monticello.  They built a wonderful life together and moved back to Maine in 1970 when they purchased a small store in Dover-Foxcroft.  After they sold Rush’s Market in 1979, she did office work for a few small local businesses and retired from the PRYMCA after working there for several years.

Ione was predeceased by her parents, her brother Garth A. Bailey, and her infant daughter Karen Lynne.

She is survived by her loving husband of 60 years, Alan; a son, Jerry Rush and his wife Nancy, of Sangerville; a daughter, Jill (Rush) Koenig and her husband Gary, of Gray; grandchildren, Kielie Gray and her husband Dean, of Hudson,  Robert and Joseph Koenig of Gray; her sisters-in-law, Claire Green and husband Bo, of Georgia, and Lois Jordan of New Hampshire; great-grandchildren, Cassidy, Bronson, and Sydney Gray, of Hudson; and several nieces and nephews.  She also leaves behind her step-grandchildren, Matt Richards and his partner Maggie, and Alison Reed and her husband Chad, and their children.  She will be greatly missed by her special granddog Tabby whom she loved and spoiled dearly.

Family and friends are invited to call 10 AM until time of service at 11 AM, September 21, 2019, at the Lary Funeral Home.  Condolences and memories may be expressed atwww.laryfuneralhome.com.