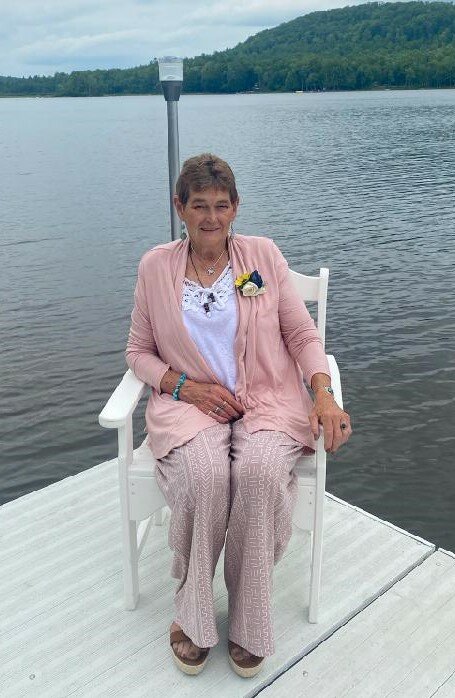 Please share a memory of Denise to include in a keepsake book for family and friends.
View Tribute Book
Dover-Foxcroft – Denise Louise (Mercier) Tirrell, 65, passed away unexpectedly December 5, 2022, at her home. She was born April 26, 1957, in Winthrop, Massachusetts, the daughter of Paul E. and Theresa Louise (McNeil) Mercier. She was a graduate from Masconomet Regional High School, Class of 1976. As a loving homemaker, Denise was loved by many and was one of the most selfless individuals known. Denise grew up in Topsfield, Massachusetts, where she found the love for horseback riding and loved going to the Topsfield Fair. One of her greatest joys was being “Nana D” to her grandchildren and they all loved her dearly. She was an avid member of the Dover-Foxcroft community, starting when her children were young as a Boy Scout Den leader to her sons, watching them along with all their friends grow. Everyone knew her for volunteering as Buddy the Elf in the Dover-Foxcroft Hometown Holidays where she put smiles on many faces. She spent many years volunteering at the Dover-Foxcroft Piscataquis Valley Fair as a fair member working in the Agricultural & Produce buildings. Amongst her many passions, gardening was one in which she took great pride in. In her free time, she also had a love for art, drawing, and poetry. Denise is survived by her lifelong partner, James Tirrell III; five children, son, Jason Tirrell and his children, Wesley, Warren, and Wade; son, John Paul Tirrell and his wife, Katie, and their children, Kennedi, Kohen, Royce, Caroline, and Finn; daughter, Christina Tirrell and her daughter, Julianna; son, James Tirrell and his wife, Mellissa, and their children, Mikey and Tyler; daughter, Denise Tirrell and her fiancé, Jesse Soden, and their son, Liam; brother, Robert Mercier and his wife, Joanne; sister, Michelle Link and her husband, Douglas; and several nieces, nephews, and extended family members. She was predeceased by her parents, and her brother, Paul F. Mercier. Family and friends are invited to visit and celebrate Denise’s life 5-8PM Friday, December 9, 2022, at the Lary Funeral Home, Dover-Foxcroft. Messages of condolence and memories may be expressed at www.laryfuneralhome.com.
Friday
9
December

Share Your Memory of
Denise
Upload Your Memory View All Memories
Be the first to upload a memory!
Share A Memory
Plant a Tree