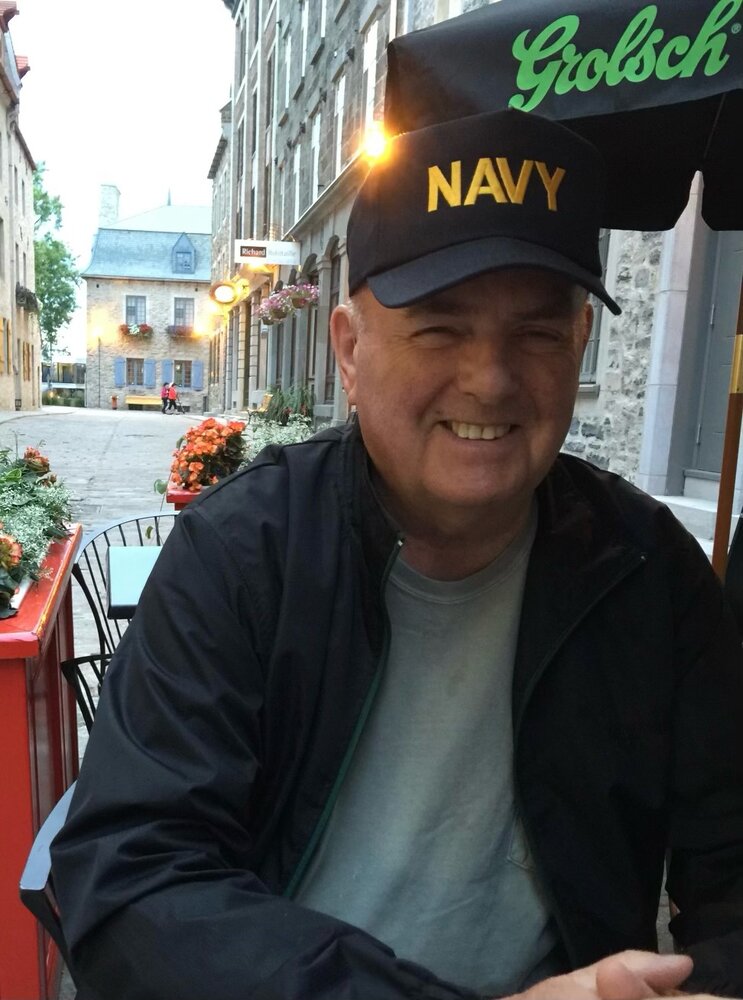 Please share a memory of John to include in a keepsake book for family and friends.
View Tribute Book
Dexter - John Joseph Goggin, 77, passed away suddenly on November 11, 2022, at his home in Dexter. He was born September 27, 1945, in Bath, Maine, the son of Joseph J. and Anna M. (Glass) Goggin. As a young boy from a Navy family, they moved quite often, settling in Guilford. He quickly met lifelong friends and the girl he was to marry, Bonnie Mae (Kirk) Goggin. After graduating PCHS in 1964 John joined the Navy. He served his country travelling the world upon the USS Independence, serving in Vietnam and earning his first Purple Heart. Upon completion of his tour, John and Bonnie began their married life in Florida and then settled back in Maine, with family following soon after. John began to work building the new high school and continued as a custodian for a short while. A yearlong job on the railroad would be his last position before finding his lifelong passion in law enforcement. In 1970 he began his job at the PCSO as an investigator under his mentor Frank Murch. In 1977 he was selected to attend FBI training in Quantico Virginia. Although being offered a job with the FBI upon graduation, John chose to return to his hometown to serve his community. Elected for his first term in 1990, he served as Sheriff of Piscataquis County until his retirement December 31, 2018, during which time he earned many awards and commendations. Soft spoken and ready with a warm hug when you needed it, John was strong and fierce in his convictions. John had his wild days lending to many stories to tell, however one of his main struggles in life was also his proudest achievement in finding his sobriety in 1981. This gave him a clarity in life and a deep understanding with those walking the same path, as well as the ability to support without judgment. John was a Past Master of the Mount Kineo Masonic Lodge #109 with 38 years in good standing, also a member of the Anah Shrine, York Rite, NRA and his beloved Ridge Association. Of John's many passions in life, being outdoors at his hunting camp, or on his tractor were among his preferred activities and all of these were shared with his family. Diagnosed early in life with essential tremors, his handwriting may have been affected, but it never touched his ability as an expert marksman right up to the last week of his life. After the loss of his first wife, John was blessed to have found Debbie in 2014 during the July 4thfestivities in Abbot where both families had gathered. After dating for some time, John proposed on a trip to Tombstone, Arizona and being a truly good man with a wonderful sense of humor, Debbie joyfully accepted. They were happily married in August 2016 and began a new chapter in their lives. Settling in Dexter, they frequently traveled to Canada enjoying visits with John's newfound Canadian family and friends, eating poutine, going to casinos, and becoming a beloved member of Debbie's family. John is survived by his wife, Deborah (Taylor) Goggin of Bromont, Quebec; son, Jason and his partner, Danielle Davis, of Guilford; daughter, Tanya Goggin Goodwin and her husband, Butch, of Guilford; daughter, Nicole Goggin of Brownfield; grandchildren, Matthew and Caroline Goggin; Samantha, Molly and Olivia Goodwin; Isaac and Margaret Wakefield, Elias and Maya Mahan; sisters, JoAnn and Mary; as well as two stepdaughters, Tara & Amy; and many step-grandchildren. John was predeceased by his wife of 46 years, Bonnie Mae (Kirk) Goggin; mother, Anna (Goggin) Foster; father, Joseph Goggin; step-father, Maynard Foster; sister, Helen Woods; and brother, Stephen Foster. Family and friends are invited to call 5:00 to 7:00 pm Friday, November 18, 2022, at the Lary Funeral Home, Dover-Foxcroft. A Celebration of John’s Life with Masonic services will be held 1:00 pm, Sunday, November 20, 2022, at the Commons at Central Hall, Dover Foxcroft, with reception to follow until 4:00pm. Private burial will be held at a later date at Lawn Cemetery, Guilford. Memorial contributions may be made to Piscataquis County Sheriff's Association in Memory of John Goggin, 52 Court Street, Dover-Foxcroft, Me 04426. Funds will be used to support students entering law enforcement. Messages of Condolence and memories may be expressed at www.laryfuneralhome.com.
Friday
18
November