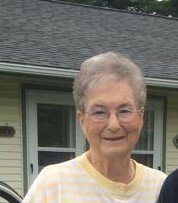 Please share a memory of Mary to include in a keepsake book for family and friends.
View Tribute Book
DOVER-FOXCROFT – Mary Elizabeth Herring Salley, 94, died peacefully on Friday, September 23, 2022, at Pleasant Meadows in Dover-Foxcroft where she had resided for the past five years. She has been reunited with her beloved husband of 65 years “Jimmie,” who passed away October 16, 2014. Mary was born in Guilford on June 11, 1928, to Charles H. and Alta (Greeley) Herring. Mary graduated from Guilford High School in 1946 after which she went to work as a bookkeeper in Allis-Chalmers Farm Machinery office, Augusta. Returning to Dover-Foxcroft after a year, she worked at Nason’s Jewelry Store where she met her future husband as he made a delivery from Railway Express. She married the love of her life, James H. Salley, on August 5, 1949. Over the following years, she worked as a bookkeeper for the following businesses: Dr. Francis Bradbury, A. T. Gellerson & Co., Maine Leathers Co. aka the tannery, C. W. & H. M. Hayes attorneys at law, and Meisner & Herring, retiring in 1992 after more than 15 years as office manager for A. E. Robinson Oil Co. but continued to work there part time for several more years. Mary was very active in her community. She was a charter member of Mocutoc Club and a member of the Dover Extension Group. She joined several different knitting and quilting groups and served as Treasurer for several years in the Women’s Community Garden Club. She was also a member of the Piscataquis Regional Y.M.C.A. In her youth she was associated with the Guilford Center Baptist Church where she later married, after which she became a member of the Dover-Foxcroft Methodist Church where her husband was also a member and she served on several church committees over the years. In 2016, at the age of 88, Mary joined Almeda Chapter #149 Order of the Eastern Star in Guilford to carry on for her husband and to support her daughter and granddaughter, all of whom had been members for many years. Quilting was Mary’s passion. Many a friend or family member has received a full- or queen-sized quilt, table runner, set of placemats, wall hanging, purse or potholder as a gift made by Mary. She even occasionally made something for herself. She also loved to sew dresses for her youngest granddaughter and her teachers waited with bated breath to see what new outfit Casey would be wearing that day. She devoted countless hours making quilts for children in need through the Linus Project, lap quilts for cancer patients temporarily lodged at Sarah’s House of Maine and sewing beautiful pillowcases for the Women’s Shelter. She also knitted or crocheted hats and mittens for the Dover-Foxcroft United Methodist Christmas tree. Mary was an avid sports fan, rooting for the New England Patriots and Boston Red Sox along with her husband. However, her favorite sports were those in which her grandchildren participated: field hockey, baseball, softball, football, cheering, and gymnastics. She travelled with her husband many miles, from Connecticut and Massachusetts to California and all-around Maine to cheer them on. Win or lose, she was very proud of family. Mary is survived by her son, Roderick James and his wife, Kathleen, of Dennison, TX; daughter, Judith Salley Getchell of Dover-Foxcroft; three grandchildren, Adam and his wife, Amy Salley, of Macungie, PA, Maquel and her husband, Alan Derosby, of Vassalboro, and Casey Lynn Getchell and her partner Jonathan Forget of Corinna; two step-grandchildren, Chris Hicks of Hot Springs, AR, and Tommy Santin of McKinney, TX; three great-granddaughters Avery and Paige Salley, and Sofia Derosby; three step-great-grandchildren, Hunter Hicks, Tyler and Makayla Santin. She is also survived by a cousin, Neola Davis, of Norridgewock, two sisters-in-law, Harriet Moen and Lois Farr of Dover-Foxcroft, and numerous nieces and nephews. She was predeceased by her husband James, her parents, two brothers, Loren and his wife Barbara Herring, and Malcolm and his wife Elizabeth Herring, twin sisters Edith and Elsie Herring, and a half-sister Marjorie Harmon. The family would like to thank the staff of Pleasant Meadows and Beacon Hospice for taking excellent care of Mary in her final years. Services will be held at the Dover-Foxcroft United Methodist Church with an Eastern Star service at 2PM, Thursday, September 29, 2022, followed by a memorial service with Pastor Jim Mello officiating. In lieu of flowers, memorial contributions may be made in Mary’s name to the Dover-Foxcroft United Methodist Church, PO Box 62, Dover-Foxcroft, ME 04426. Arrangements are in the care of the Lary Funeral Home. Condolences and memories may be expressed at www.laryfuneralhome.com.
Thursday
29
September