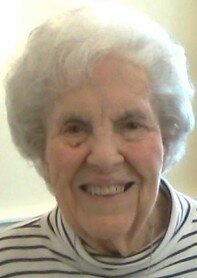 Please share a memory of Lucille to include in a keepsake book for family and friends.
View Tribute Book
Avon, CT – Lucille P. Chase, 100, passed away peacefully on August 14, 2022, at her home of over five years at The Residence at Brookside in Avon, CT. She was born in July 1922, in Westerly, Rhode Island to Adrian R. and Helen M. (Ham) Pierce. At age six she moved with her parents and younger brother, Tom, to Dover-Foxcroft, Maine. Starting about 8th grade, she would often be a help to her grandmother after her grandfather passed away, by walking to her home and staying with her overnight. Lucille graduated from Foxcroft Academy in 1941. Shortly after graduation, when her father opened a second Gas & Electric store in Keene, New Hampshire, Lucille moved to a room in town and did office work at an insurance company there. She stayed there for 2-3 more years after Helen and Adrian moved back to Dover-Foxcroft, then also returned to Dover-Foxcroft herself in 1945, while the war was still on, to work in the town office. It was there she met Cecil Chase in June 1947, and they were married three months later. Cecil and Lucille would live briefly in Maine, then in western Massachusetts for several years, where their daughter was born. In early 1956 they took off for California. They only stayed for about 2-3 weeks, when after much pleading from Lucille’s mother to come back to New England, they thankfully returned, and settled in Connecticut. Both Lucille and Cecil very much enjoyed travel and were able to take vacations with their trailer over the years to many places in the US and Canada with daughter Kathy, then by themselves when, especially for a couple years after Cecil retired, they were able to travel for 2-3 months at a time. Many national parks were highlights of these trips. Lucille and Cecil were long-time members of Second Baptist Church in Suffield, CT. They had been married for over 62 years when Cecil passed away at age 90. Lucille was a fan of the Red Sox and even attended several games at Fenway Park with her father when growing up, and one with her husband. She was also a fan of the UConn Women’s Basketball teams and was able to enjoy some get-togethers with special neighbors over the years to watch some games and to enjoy other times as well. Recently Lucille got to celebrate her 100th birthday! The Brookside staff and residents gave her a lovely party for her birthday, with daughter, Kathy, there as well. In the following two weeks, Lucille also got to enjoy two other visits and celebrations with more family members. Lucille was a wonderful, kind, and sweet person, well loved by all those who knew her. She always had a ready smile. Daughter Kathy was much blessed to have had such a wonderful Mom, who is, and will be greatly missed. Lucille is survived by her daughter, Kathy Todd and her husband, Jim of Collinsville, CT, brother-in-law, Terry Chase and his wife. Mary Lou, and many nieces and nephews and their families. She was predeceased by her husband Cecil; also, by her brother, Dr. Thomas Pierce (Alice); brothers-in-law. Henry Chase Jr. (Hilda), Robert Chase, Harold Chase; and sisters-in-law. Joyce Leavitt (William), Elizabeth Stevens (Lester), Pauline Norwood (Maurice), and Florence Libby. The family would like to thank the caregivers and other staff at The Residence at Brookside for their kindness and care of Lucille during her time at The Residence at Brookside. Lucille also met many nice residents over her years there. Family and friends are invited to call from noon until time of the funeral service at 1 p.m. Tuesday, August 23, 2022, at the Lary Funeral Home, Dover-Foxcroft, with Pastor Chris Viera officiating. Burial will be in the family lot in Evergreen Cemetery, Milo. In lieu of flowers, those who wish may make memorial contributions to Second Baptist Church, 100 North Main St., Suffield, CT 06078, or to Foxcroft Academy, 975 West Main Street, Dover-Foxcroft, ME 04426, Attn: Cathy Hall. Messages of condolence and memories may be expressed at www.laryfuneralhome.com.
Tuesday
23
August

Share Your Memory of
Lucille
Upload Your Memory View All Memories
Be the first to upload a memory!
Share A Memory
Plant a Tree