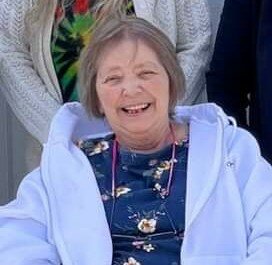 Please share a memory of Jean to include in a keepsake book for family and friends.
View Tribute Book
Dover-Foxcroft - Jean M. (Drummond) Kimball, 70, passed away peacefully August 16, 2022, at Hilltop Manor in Dover-Foxcroft, with family by her side. She was born July 25, 1952, in Dover-Foxcroft, the daughter, Malcolm J. and Patricia A. (Boutilier) Drummond. Jean worked for Puritan Medical Products for many years. She enjoyed playing cards and crocheting. Jean is survived by her mother, Patricia Drummond; two sons, Peter Drummond and his fiancée, Kim Kinney, and Andrew Kimball and his fiancée, Christina Davidson; six grandchildren, Gregory Libby, Nox Gray, Kassy Casey, Sarah Gray, Rylee Kinney, and Logyn Kinney; brother, Thomas Drummond and wife, Harriett; two sisters, Carol Davis and husband, Vaughn, and Susan Geffers and husband, Charles; and several nieces and nephews. She was predeceased by her father, Malcolm Drummond, and longtime companion, Thomas Borden. A graveside memorial service will be held 11AM Saturday, August 27, 2022, at the family lot in the Abbot Village Cemetery. Arrangements are in the care of the Lary Funeral Home. Messages of condolence and memories may be expressed at www.laryfuneralhome.com.
Saturday
27
August