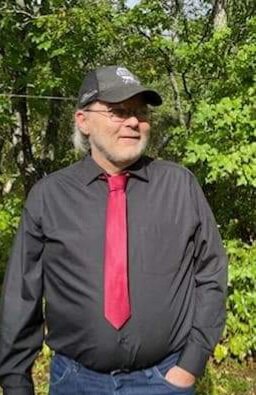 Please share a memory of Daniel to include in a keepsake book for family and friends.
View Tribute Book
Dover-Foxcroft – Daniel J. Blockler, 57, passed away June 26, 2022, at his home surrounded by family. He was born January 12,1965, in Dover-Foxcroft, the son of Nathan R. and Sharon A. (Bonsey) Blockler. Dan was the youngest boy of 5 children but took his role as protector and supporter of his family and friends very seriously.  He would stop and help anyone regardless of if he liked you or not; but he wouldn’t mince the truth either.  Dan enjoyed fishing and spending time in the garage tinkering with whatever needed to be fixed. He had a love for classic cars, particularly the Pontiac GTO. He was quick witted with a smart remark or taunting joke and always set aside time to connect with whatever kids were around. He worked as a carpenter alongside his father for many years building many places that stand today in our community and surrounding areas. During his battle with ALS he became a teacher and student, amazing us with his independent drive and sheer stubbornness.   Dan is survived by his daughter, who was the center of his world, Morgan (Blockler) Moulton and her husband, Justin; and his grandson, Bradley. Along with two brothers, Richard and his wife, Cathie; Gerald and his wife, Shelley; two sisters, Lorrie Blockler and Patricia King and her husband, Clinton; and his niece and nephews, Michael, Nathaniel, Scott, Matthew, Hailey, and Caleb.  A graveside service will be held 3PM Friday, July 1, 2022, at the family lot in the Rural Grove Cemetery, Dover-Foxcroft, with a reception to follow. Donations may be made in Dan’s memory to the ALS Association Northern New England Chapter. Arrangements are in the care of the Lary Funeral Home. Messages of condolence and memories may be expressed at www.laryfuneralhome.com.
Friday
1
July

Share Your Memory of
Daniel
Upload Your Memory View All Memories
Be the first to upload a memory!
Share A Memory
Plant a Tree