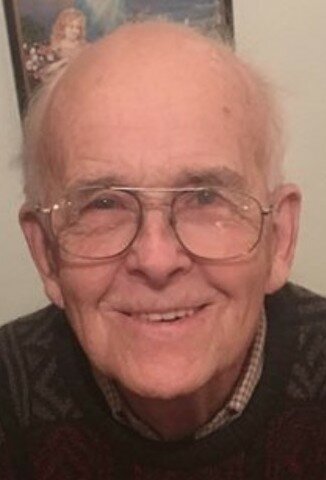 Please share a memory of Kenneth to include in a keepsake book for family and friends.
View Tribute Book
Dover-Foxcroft – Kenneth R. Bearce, 88, loving husband, devoted father and grandfather, passed away peacefully at home May 18, 2022, He was born December 16, 1933, in Dover-Foxcroft, the son of Kenneth A. Bearce and Corinne Babin. Ken graduated from Foxcroft Academy, He served in the U.S. Navy during the Korean War. While home on leave Ken met the love of his life while attending Mass at St. Thomas Aquinas Catholic Church. It was love at first sight. Glenna was charmed by his handsome smile. Being a child of the 1930’s resulted in a lifetime of frugality. Ken excelled at living within his means, often visiting many dumps and never coming home empty handed. He was gifted with the ability to build or repair anything. And his stories were endless. Ken’s working career included working for the local police departments, Chase and Kimball Oil Co., and he retired from New England Telephone Company. Dad’s hobbies included hunting, fishing, camping, reading, puttering in his garage, and anything that included helping his neighbors at Sebec Lake. Ken leaves a daughter, Tiffany Fowles; a son Jeffrey and his wife, Jane; a daughter, Ann Scribner; and a daughter, Colette Simmons and her husband, John; six grandchildren, Rebecca, Nicole, KC, Kaitlyn, Abby, and Dustin; eight great-grandchildren; his sister, Mary Mallett; several cousins, nieces and nephews; and his faithful companion, Sparky. He was predeceased by his parents; his brother, Charlie; his wife of 55 years, Glenna; and an infant daughter. The family would like to thank the wonderful hospice team from Kindred, Crystal and Harmony, and a private nurse, Lynne. Your compassionate, thoughtful care of our dad enabled us to be able to keep him at home comfortably. Due to COVID, a private memorial Mass will be conducted at St. Thomas Aquinas Catholic Church, Dover-Foxcroft, with Fr. Robert Lupo, celebrant. A private burial will be held in the family lot at Rural Grove Cemetery. In lieu of flowers, donations for Mass cards at St. Thomas would be appreciated. Arrangements are in the care of the Lary Funeral Home. Condolences and memories may be expressed at www.laryfuneralhome.com.

Share Your Memory of
Kenneth
Upload Your Memory View All Memories
Be the first to upload a memory!
Share A Memory
Plant a Tree