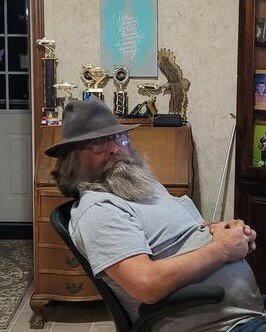 Please share a memory of Larry to include in a keepsake book for family and friends.
View Tribute Book
Sebec - Larry K. Laney, born February 28th, 1964, in Waterville, Maine, passed away December 11th, 2021. The world lost an amazing man who will be missed dearly by all: his loving wife and soulmate of 39 years, Lois Laney; his son, Joseph D. Lambert; daughter, Doris Ann Strout; four grandsons, Cody Strout, Tristin Lambert, Joshua Lambert, Brayden Lambert; a great-granddaughter, Paisley Stanley; four brothers, Paul Laney Jr, Norman Bates, Dennis Bates, and Dwayne Bates; three sisters, Norma Bates Moody, Cheryl Bates Frost, and Juanita Bates Fields; Auntie Irene (Tina) Alton was like his mother; other aunts, Dawn Young, Kathy Johnston, and Joyce Grandmason; two uncles, Robert Alton and Dale Laney; many cousins; brothers-in-law, Leonard Lowe, James Lowe, Edward Lowe, and their families; a beloved sister-in-law, Peggy and her husband, Whitney Naquin, and DebbieYarbrough Acuff. Larry was the owner and operator of EverGreen Auto Salvage and Towing out of Sebec Maine for 29 years. He loved helping everyone. He was a dedicated AAA provider for many years. He never left anyone stranded. He also worked with our local Piscataquis and Penobscot County Sheriff’s Departments as a tow truck operator. He always said after every tow was done that he loved, “shooting the bull with them Good Ole Boys.” Larry loved going fishing with his wife, son, and grandsons, but his passion was getting behind the wheel of his Tuff Truck, “The IRONMAN”. He was absolutely dedicated to the Demolition Derby for 32 years. He loved snowmobiling, whether riding the trails with family and friends or making his mark on White Cap Mountain. “Team Stop N Smoke” The men Larry looked up to and admired were his tow truck brothers: Dana Grass and Dave Berry. The ones that were close to his heart like fathers were Emory Cole, Donald (Huggy Bear) Cianci, and Merle (Bub) Shorey. He had many close lifelong friends he considered his brothers: Rodger Belanger, Robert Russell, Donald Cianci Jr, Tony Stefanilo, Everett Gray, Stanley Woodard, Charlie Cummings, Mike Gilbert Sr, Mike Witham Jr, Ervin (Junior) Peterson, Joe Legere, Robert Stymist, Barry Babcock, Craig Dyer, Kevin Hix, Frank Maker, Billy Smart, Clyne LaBree, Lewis Reed, Steve Saunders, and Fred Annance. The boys that he watched grow up and thought of as his own: Joshua Doore, Corey Weymouth, David Cianci, Trey Weymouth, Chris Weymouth, Joe Wright, Danny Bishop, Sheldon Woodard, Shawn Woodard, Brian Monahan, and Danny Monahan. Larry loved his fur babies beyond words: Thomas, Little Man, Furball, Sammy, and Spooky. The Man, The Myth, The Legendary Larry Laney The IRON MAN My beloved husband, we did not know that morning God would call you Home. You did not go alone sweetheart, a part of us went with you. Rest In Peace. See you on the other side A graveside funeral service will take place in the spring at the family lot at the Sebec Corner Cemetery. Immediately following, everyone will gather at the dining hall at the Piscataquis Valley Fairgrounds in Dover-Foxcroft to celebrate and share memories of the life of Larry Laney. Arrangements are in the care of the Lary Funeral Home. Messages of condolence and memories may be expressed at www.laryfuneralhome.com.
Friday
13
May

Piscataquis Valley Fairgrounds May 13, 2022, after the graveside service at 2:00 pm.
Online Memory & Photo Sharing Event
Online Event
About this Event

Share Your Memory of
Larry
Upload Your Memory View All Memories
Be the first to upload a memory!
Share A Memory
Plant a Tree