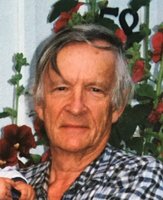 John Daniel Ricker, 86, passed away November 22, 2020, in Kittery, Maine. He was born on October 22, 1934, the son of George William and Isabel Adelaide (McCorrison) Ricker. John grew up on the farm, in Sebec, Maine. He graduated Valedictorian, Milo High School Class of 1953. He received his bachelor’s degree, with high distinction, in mechanical engineering in 1957 from the University of Maine. An early career as a research engineer began at Kodak, Rochester, NY, and included Oxford Paper Company, Rumford, Maine. He was later active in the Oxford Hills community as owner of Rik Rak, a sporting goods store. On his “Simplicity Farm”, in Andover, Maine, John was known for his bountiful and creatively designed vegetable garden. He referred to himself as “John the Peasant – Philosopher”. A man of ideas, John corresponded with long letters, shared newspaper clippings and poetry, and stocked his bookshelves with challenging titles. He shared his love of birds, history, maps, back roads and quiet spaces with many. John’s fall and head injury four years ago took him away from his Andover haven. Covid over-whelmed his nursing home recently. After a two-week struggle with the virus and a near recovery, he died suddenly. He is survived by three children, Susan Ricker and her husband, William Zarakas, Dearle Ricker and her partner, David Barlass, and David Ricker; son–In-law, Robert Childers; his grandchildren, Claire and Peter Zarakas, Phoebe, Heather and Heidi Ricker, and Galen and Allison Childers; his nephews, Kenneth and James Miller; and his dear friend, Walter Macdougall. John was predeceased by his parents; daughter, Janet Elaine Ricker; sister, Ann (Ricker) Miller; and former wife and mother of their children, Katherine Shirley (Dority) Ricker. A gathering in celebration of John’s life is hoped for Spring. John’s final resting place will be Farnham Cemetery, Atkinson, Maine. Donations in John’s memory may be made to Page Farm and Home Museum, www.our.umaine.edu/pagemuseum. Condolences and remembrances may be expressed at laryfuneralhome.com.