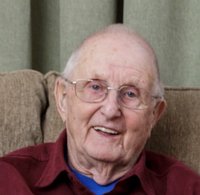 Guilford -Paul L. Ruksznis, 92, passed away peacefully at home on September 25. He was born June 10, 1928, the son of Frank and Virginia (Littlefield) Ruksznis, Paul graduated from Guilford High School in 1946. He began working for the U.S. Postal Service in 1946 and then served in the Maine National Guard and U.S. Air Force in Manchester NH, where he established many friendships that lasted a lifetime. He returned to Guilford, and married his high school sweetheart, Catherine “Kay” Johnston in 1954. Together they had 4 children. He worked for the U.S. Postal Service until retiring in 1988. Paul’s lifelong passion was hunting and fishing, which he was able to enjoy until recent years. He built a camp on Whetstone Pond in 1950 where he enjoyed 70 summers with his wife, family, and friends. In his retired years, they spent many winters in Florida. Paul was a member of the Guilford Fire Department, serving as chief for 5 years. He served as a Piscataquis County Deputy, was a 50 year member of the Masons then Shriners, member of the IOOF Lodge 37, and town selectman for 2 terms. Paul was an advocate to build and served on the board for the senior citizens complex, Riverbend Homes. He is survived by his wife of 66 years, Catherine; sons, Thomas Ruksznis and wife; Penny Smith Ruksznis of Skowhegan, Frank Ruksznis and wife, Cheryl Hartford Ruksznis of Sangerville; daughters, Mary Smith of Portland, and Judith Folsom and partner, David Bovill of Moultonboro, NH; foreign exchange student daughter, Marina Gomez de Ormeno and husband, Jorge of Bogota, Columbia; brother-in-law, William Johnston and wife, Julie of Poquoson, VA; sister-in-law, Bernadette Johnston of Venice, FL; 8 grandchildren; and 4 great grandchildren. Paul was predeceased by his parents, Frank and Virginia Ruksznis, and cousin, Phyllis Sharpe Mills. The family wishes to thank the caring healthcare providers who assisted Paul: Rose, Cathy, Diana, and Chris. Due to the COVID-19 restrictions, a small private service will be held. Burial will be in the Elmwood Cemetery, Guilford. In lieu of flowers, donations may be made to the Guilford Fire Department, P.O. Box 355, Guilford, ME 04443. Arrangements are in the care of the Lary Funeral Home. Messages of condolence and memories may be expressed at www.laryfuneralhome.com.