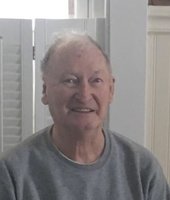 Dover-Foxcroft - George E. Hartley, 79, passed away July 17, 2020, at his home in Dover-Foxcroft, surrounded by family. George was born in Charleston, Maine, to the late Mary Bemis Hartley and Lee Hartley, on July 19, 1940. He graduated from Corinna Union Academy in 1958. George is survived by the love of his life, Maryann, his devoted wife of 57 years. George was a good man with a kind heart and gentle soul, hard-working and fun-loving throughout his entire life. He was a talented machinist at the Millinocket Machine and Foundry Corporation for 33 years, but really enjoyed working with wood: building his home, camp, windmills, small bowls, wooden puzzles, furniture, and anything else Maryann asked for. He was a true outdoorsman: fishing, hunting, canoeing, biking, running, hiking, cross-country skiing, beekeeping, tapping maple trees, and camping at Little Moxie Pond with his wife; and, a spirited card player when stuck indoors. His little devilish laugh will never be forgotten, heeheehee. George was forever a dedicated family man as well. As a young father, George enjoyed coaching his sons in little league baseball and teaching his daughter about the sun and the moon. In later years, George spent many hours with his grandchildren, playing ball, building Easter Egg treasure hunts, and taking them to his camp. Later in life, even as Alzheimer’s took his mind, George remained true to his spirit, helping Maryann with dishes, vacuuming, and getting the mail. He loved watching the birds, walking through his neighborhood, and taking rides to see the deer. Forever happy and playful, George also enjoyed whistling and winning at cards. And he never forgot to tell Maryann every day that he loved her. George was predeceased by three of his siblings: Bernice Berkenfield, Raymond Phelps, and John Hartley. He is survived by his brothers, Albert Hartley and his wife Marilyn, Robert Hartley and his wife Debbie, and sisters, Elizabeth Richards, Janice Nickols, and Zenie Lockwood. He also leaves behind three children, Troy Hartley, Dean Hartley and his wife Doreen, and Julie Maxson. George had three grandchildren, Emma Hartley, Griffin Hartley, and Steven Hartley and his wife, Xiaoxiao, one great-grandchild, Hannah Hartley, and several nieces and nephews. A special mention to Jennifer Brewer of Sebec for playing endless card games of War with George, providing companionship, and supporting his wife and children through the end. The family would also like to thank Beacon Hospice Care for their support. In lieu of flowers, please make donations to the Alzheimer's Association, Maine Chapter, 383 US Rt 1, #2C, Scarborough, ME 04074. At George's request, there will be no funeral services. Arrangements are in the care of the Lary Funeral Home. Condolences and memories may be expressed at www.laryfuneralhome.com.