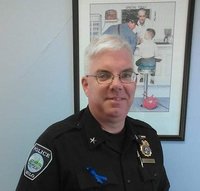 Milo – Damien J. Pickel, 51, passed away unexpectedly March 30, 2020, at his home. He was born October 5, 1968, in Brooklyn, New York, the son of James D. and Judith B. (Conlin) Pickel. Damien grew up in Massapequa Park, New York, and he served on the Massapequa Volunteer Fire Department. He worked for the NYPD for nearly 20 years, retiring in 2008, as a detective. Damien moved to Dexter and served on their police department. He then became an officer in the Milo Police Department, working his way up to Chief. In 2016, Damien became Town Manager of Milo. He was still currently working as both the Chief of Police and Town Manager. Damien quickly won the hearts of the Milo community with his caring manner. He was involved in many programs to support the local kids and always looked after them, the elderly, those recovering from addiction, and those who were less fortunate. Simply said, he believed in all the good that Milo had to offer and wished to bring it out for everyone. Damien enjoyed working, spending time at Lake George, time with family, crashing cars with his buddy Jace, cruising with his sidekick “Chadfrey”, morning "meetings" at the fire department with his coffee friends, giving “Cookie” a hard time, and enjoying a beer with “Rideout”. Damien is survived by his wife, Angela M. (Barnett) Pickel; mother, Judith Pickel; two daughters, Madisen and Alaena Pickel; two stepchildren, Kristyn Badger and her husband, Chad, and Thomas Carpenter; three grandchildren, Jace, Bristol, and Brielle; sister, Christina Ficarelli and her husband, Buddy, and their children, Samantha, James, and Maddie; six aunts, Elizabeth, Ann, and Mary Conlin, Genevieve Johnson, Kathleen Pickel, and Mary Docherty; good friend, Mikey; valued mentor, Jim Emerson; and his entire law enforcement family in Piscataquis County. He was predeceased by his father, James Pickel; grandparents; many aunts and uncles; and a special cousin, Stacey Johnson. Due to the Covid-19 pandemic, we are not able to hold public services at this time. A memorial service will be held at a time to be announced. Arrangements are in the care of the Lary Funeral Home. Messages of condolence and memories may be expressed at www.laryfuneralhome.com. As Damien often said, “I’m kind of a big deal!”