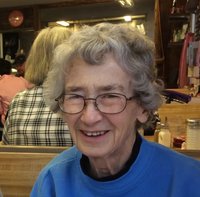 She and Donald A. Ambler were married September 8, 1951, at the College Avenue Reformed Church in New Brunswick, NJ.  Their honeymoon was spent at the Ambler camp in Bowerbank.  They first had an apartment in New Britain, CT, while Don was employed with Stanley Electric Tools.  Then they moved back to the New Brunswick area and a home in Wynnwood in Piscataway, NJ.  Jane served as a dental assistant for her brother-in-law, Walter W. Ambler, DDS, in Highland Park, NJ, for 10 years, during which time she studied and earned her certification for dental assisting.  Their daughters Jenifer and Brenda were born June 1961 & January 1963.

Vacations were spent at Sebec Lake, as well as many long weekends.  In January 1964 they moved to Maine year round, first renting the first floor of a home on Lincoln Street, then owning a home on Winter Street both in Dover-Foxcroft, and then building a house in Sebec in 1973.

She was employed as a medical secretary part time for several years for Dr. Lloyd Van Lunen in the Mayo Medical Offices, and for 40 years she was a loyal volunteer, holiday-decorator and brownie baker at the cancer clinic at Mayo Regional Hospital.

A memorial service will be held on Saturday Sept 22, 5:00 pm at the Dover-Foxcroft Congregational Church, with reception immediately following in the DFCC Chapel.Burial will be private in the family plot in Sebec Corner Cemetery, Sebec. Memorial contributions may be made to the Tracy Hibbard Kasprzak Cancer Treatment Center, Mayo Regional Hospital, 897 West Main Street, Dover-Foxcroft, ME 04426, or Pine Tree Hospice, 883 West Main Street, Dover-Foxcroft, ME 04426. Messages of condolence and memories may be expressed at www.laryfuneralhome.com.