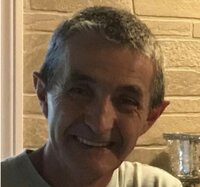 Dover-Foxcroft - Mark V. Marshall, 63, passed away December 22, 2021, surrounded by his family after a long battle with cancer. He was born January 22, 1958, the son of Theodore and Mary Jane Marshall. He is survived by his wife, Lucielie; his mother, Mary Jane; his brother, Bret and his wife, Lorna; his sons, Michael and Travis; his daughters, Robyn and Kirsten; grandchildren; and his family at Foxbrook Variety. He was predeceased by his father Theodore Marshall and his brother Scott Marshall. At Mark’s request, there will be no services. Arrangements are in the care of the Lary Funeral Home. Messages of condolence and memories may be expressed at www.laryfuneralhome.com.