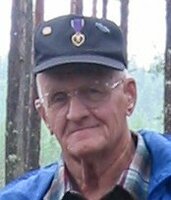 Monson - Milton “Mickey” Leroy Anderson passed away at the Maine Veterans Home in Bangor on Friday December 10, 2021. He was the son of August Victor Anderson and Laura Geraldine Leeman and was born May 9, 1931, in Monson. He graduated from Monson Academy in 1950. The woods of Maine and hunting were among his favorite things. His earliest job, working for the Appalachian Trail Company while in high school, and his later job working as a scaler, reflect his love of the outdoors. He was a lifelong hunter although in later life when the game was no longer needed to feed a large family he was more likely to carry a camera than a gun. He enlisted in the army in 1950, served in Korea during the war, and earned several medals including a Purple Heart. Besides serving in combat, he also drove ambulances for a MASH unit and worked at the military ports. In June of 1952, while home on leave, he married Flora Ann Brown. After the war, in 1953 he was transferred to the Army Reserve and worked for the Forest Service until he was recalled to active duty in 1955. In 1956, Flora and their two boys came to live in Babenhausen, Germany while Mickey was stationed there. In 1957, they returned to the US, now with three boys. The family lived in Mickey's mother's home on Main Street in Monson until they bought a home on Elliotsville Road, where they lived for many years and had three more boys. Later, he and Flora built a house next to Leeman Brook, where they have resided for decades. The field in front of their house has been the site of many gatherings, including a few weddings. After the Army, Mickey worked for Moosehead Manufacturing in Monson making furniture until he got a job as a wood scaler with Great Northern Paper, where he worked until the late 1980’s, eventually becoming Chief of Clerks and Scalers. Taking an early retirement deal, he then started work with a local company putting in roads, septic systems, and the like. He also had a side business he called “Old Fart with a Tractor,” where he would do jobs with his tractor around the area. In retirement he volunteered in a variety of positions in the local town government. Flora and Mickey often traveled around northern New England and eastern Canada on vacations, usually accompanied by Flora's sister, Beverly, and her husband, Robert “Bob” Roberts. Newfoundland was a favorite destination, the group making five trips there. In 2004, family in Sweden rediscovered the family in Maine, and Mickey traveled to meet with a large number of no-longer lost family in Northern Sweden, some of whom then came to Maine to visit and have maintained contact since. Mickey is survived by his sons, Irelann Kerry Anderson and spouse, Therese, Joel Milton Anderson, Victor John Anderson and spouse, Lori, Mark Emery Anderson, Wade Bennett Anderson, Tracy Wayne Anderson and partner, Shelly Jardine; 7 grandchildren, 19 great-grandchildren, 1 great-great-grandchild, and other relatives too numerous to fit here. He was predeceased by Flora, his wife of 67 years; his parents; two brothers, Raymond Anderson and Emery Dunfee; three grandchildren, Bambi Lee Anderson, Mickey Lee Anderson, and Corey Lee Anderson. There will be a memorial and pot-luck at the Monson Gymnasium Monday, December 27, 2021, at 2PM. We plan to scatter Mickey and Flora’s ashes in their field next to Leeman Brook sometime in the spring. Arrangements are in the care of the Lary Funeral Home. Condolences and memories may be expressed at www.laryfuneralhome.com.