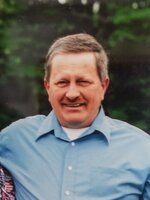 Dover-Foxcroft – Richard “Rick” H. Chambers, 61, passed away unexpectedly December 8, 2021, at his home. He was born June 17, 1960, in Dover-Foxcroft, the son of Martin C. and Lucille M. (Pinette) Chambers. Rick proudly served with the United States Army Reserves as a Sergeant First Class. He worked for Parallel Transportation Services for most of his younger years. He proudly worked for his best friend, Peter Patten for many years at Patten Farms, and had currently been working for the Town of Dover-Foxcroft Public Works. Rick enjoyed hunting and fishing with his boys, snowmobiling, and camping on Seboeis Lake surrounded by all his favorite people, his family. His greatest love was his family and nothing mattered more to him; he absolutely loved to be with his grandchildren and would beam every time they called him “Papa”, "Poppi", or "Pops". Rick always made sure that there was a snowmobile for every kid and loved to watch them buzz around in circles across the backyard. He will be remembered by many as being mechanically inclined and crafty; he always appreciated fixing things and making things for others. Rick is survived by his loving wife and soulmate of more than 42 years, Patricia (Raymond) Chambers; mother, Lucille Chambers; daughter, Amanda Chambers and her husband, Michael Wolper; three sons, Adam Chambers and his fiancée, Allyson Dow, Chris Chambers and his wife, Jessica, and Greg Chambers and his wife, Katie; eight grandchildren, Colby, Eliza, Lilly, Bella, Brayden, Lindsey, Ella, and Ariyah; three brothers, William Chambers and his fiancée, Debra Ross, Jason Chambers and his wife, Belen, and Charles Chambers and his wife, Rhonda; two sisters, Maureen Trefethen, and Erica Libby and her husband, Doug; mother-in-law, Sandra McLarrin; five sisters-in-law, Pam Raymond and her partner, Chris, Julie LeBlanc and her husband, Gary, Sherry Stone, Susan Raymond and her husband, Timothy, and Dianah McLarrin; two brothers-in-law, Ron Raymond and his significant other, Diane White, and Roger Raymond; and several very special nieces, nephews, and cousins, aunts and uncles. He was predeceased by his father, Martin Chambers, and his brother, Paul Chambers. Services will be announced at a later date. Arrangements are in the care of the Lary Funeral Home. Messages of condolence and memories are expressed at www.laryfuneralhome.com.