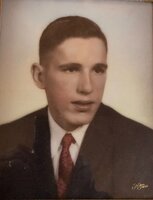 Bangor - Jerald W. Melia, 82, died peacefully on 13 November 2021 at Westgate Manor Rehabilitation Center, Bangor. He was born 22 July 1939, in Dover-Foxcroft, son of George and Virginia (Dean) Melia. Jerald (affectionately known as Jerry) was a man who loved his family and was a proud member the local community. He was a P.C.H.S. Class of 1959 Alumni. He worked at Guilford Industries for many years, as well as several custodial jobs within the community. He was a member of the Guilford United Methodist Church and sang in the choir for most of those years. Additionally, he is best remembered as an avid sportsman (hunting, fishing, canoeing, and trapping), loving the outdoors and lover of many different genres of music. Jerry is survived by his two sons, Mark W. and wife Kathy, of Parkman and the U.S. Navy in Chesapeake, Virginia and Jon of St. Albans; two granddaughters, Trista Melia of Bangor and Tiffani (Tiff) Melia of Portland; two brothers and a sister, Malcolm of Dover-Foxcroft, Dottie (Melia) Maheux of Guilford, and Alan and Holly Melia of Monson. Jerry was predeceased by his parents, George and Virginia; a grandson, Kegan Melia; a brother, Roger; former spouse, Sharon (Mitchell) Melia; and special companion and love of many years, Lillian Saunders. There will be visitation hours on 17 November 2021, at 10:00 a.m., funeral service at 11:00 a.m., at the Lary Funeral Home, Dover-Foxcroft, and burial at Village Cemetery in Sangerville, immediately following the funeral service. Arrangements are in care of the Lary Funeral Home. Condolences and memories may be expressed at www.laryfuneral home.com.