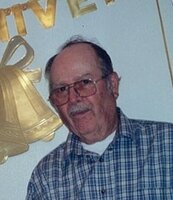 Orneville – Robert D. Robinson, 91, beloved husband of the late Phyllis Dean Robinson, passed away November 3, 2021, at Northern Light Eastern Maine Medical Center, Bangor, after a long battle with dementia. He was born September 25, 1930, in Flint, Michigan, the son of Warren and Icel (Longhouse) Robinson. Robbie served in the U.S. Navy for four years on the U.S.S. Harlan Dickson destroyer. While in the service he met his wife, the love of his life, Phyllis. They lived in Michigan where he worked at General Motors until they moved to Maine in 1969. He then worked driving cement mixer for 22 years before retiring in 1992. Robbie enjoyed fishing, gardening, hunting, and hunting for rocks. Robbie is survived by his four sons, twins, Steven of Bradford, and Stanley and his wife, Pamela of Bangor, Robert E. and is wife, Lisa, of Brownville, and Douglas of Orneville; nine grandchildren, Jessica McCraw, Daniel Robinson, Amanda Flewelling, Matthew Robinson, Candi Labree, Bobby Robinson, Kristin Bender, Ryan Robinson, and Derek Robinson; 13 great grandchildren, including two special great grandchildren, Corbin and Danica Flewelling; and one great-great granddaughter. He was predeceased by his wife, Phyllis; brother, Richard Robinson; and sister, Dixie Marshall. A graveside funeral service will be held 11AM, November, 10, 2021, at the Schoodic Cemetery, Medford. Arrangements are in the care of the Lary Funeral Home. Messages of condolence and memories may be expressed at www.laryfuneralhome.com.