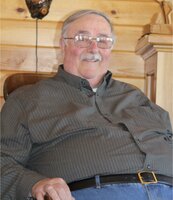 Greenville – John P. “Johnny” or “J.O.” Owens, Jr., passed away October 23, 2021, at his residence, with his family by his side. He was born July 2, 1945, in Greenville, the son of John P. Sr. and Mary (Warman) Owens. John had served with the U.S. Army Reserves from 1966-1971. He was a member of the American Legion and had served twenty years with the Greenville Police Department and the Piscataquis County Sheriff's Office. Over the years he had worked as a milkman, a bus driver, an ambulance driver, and for C.A. Dean Memorial Hospital in the maintenance and security departments. He will be remembered for his donuts (J.O.’s Donuts) and for being an avid Greenville Lakers fan. John was a loving husband, father, grandfather, brother, friend and neighbor. He was also loved by the entire community, which he served with an open and generous heart. A large man because of his huge heart, he was a friend to all – once a friend, always a friend. His door was always open to family and friends as he truly enjoyed lots of gatherings. He never said no to his daughter and friends, and later, even to his granddaughter and her friends. He always said he would rather have them safe at his home, rather than out getting into trouble. Even when he had to bring people into jail they still considered him a friend because of the respect he always showed them. John is survived by his wife of almost 53 years, Colleen N. (Maynard) Owens; his daughter, Tammy Vraux and her husband, Robert; the apple of his eye, granddaughter, Emily Vraux; sisters, Marena Schultz and her husband, Rick, and Kathy Hughes and her husband, Jason; brother and sister-in-law, Gail and Bill Maynard; brother-in-law, Bob Cossette; and several nieces, nephews and cousins. He will be missed by two special cats, Pickles and Biscuit, as well as special friends, Donald "Zeke" Anderson, Greg Christensen, and honorary granddaughter, Jenna Pelletier. John was predeceased by his parents; his sister, Nancy Laskey; his brother, Galen Owens; and his sister-in-law, Carolyn Cossette. Friends are invited to call from 11:00 a.m. to 1:00 p.m. Saturday, Nov.6, 2021, at the Greenville Chapel of the Lary Funeral Home on Pritham Ave., Greenville. Immediately after the visitations, a graveside memorial service with military honors will be conducted at the family lot in Greenville Cemetery. Those who wish may make memorial contributions to C. A. Dean Ambulance Service, 364 Pritham Ave, Greenville 04441. Condolences and memories may be expressed at www.laryfuneralhome.com.