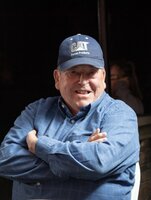 Rockwood - Ivon “Dody” Gerad Turmel, Sr, 81, died September 15, 2021, at his home with his loving family by his side after a brief illness with cancer. He was born January 3, 1940, son of Rosie (Rancourt) and Prosper Turmel of Jackman. He is a Jackman native, graduating from St. Anthony’s Parochial School and Jackman High School, Class of 1958. In July of 1962, Ivon married the former Gail M. Rancourt of Rockwood, at St. Joseph’s Mission Catholic Church, where he remained a lifetime member. A veteran of the U.S. Army, Ivon served from 1962 to 1964. He was stationed at Fort Sill, Oklahoma, as a private first class. Ivon started out as a clerk at Tessier’s store in Rockwood before becoming the Postmaster of the Rockwood Post Office to which he was appointed in 1970 and retired after 42 years of dedicated service. He loved to greet the local community as well as the summer residents to the region. Ivon’s dedication and love of the job was evident in the fact that for 38 years he did not use any sick time. Ivon’s lifetime also included 50 years as a Deputy Sheriff of the Somerset County Sheriff’s Office. Active in civic affairs, Ivon was a fourth degree honorary life member of Greenville Knights of Columbus, a member of the Maine Law Enforcement Association, Rockwood Volunteer Fire and Rescue Department, Columbia-Doric Masonic Lodge in Greenville, American Legion Post #94, and a volunteer member of the Moosehead Historical Society. His interests include hunting, fishing, traveling, dancing, country music, playing lottery, bingo, and spending time with his grandchildren. Ivon had a cameo on the show “Diners, Drive Ins, and Dives” in September 2010, at Bob’s Clam Shack in Kittery. Ivon was affectionately known as the “Mayor” of Rockwood and will be remembered by his hard work, dedication, friendliness and gift of gab. He had unwaving support, generosity and love towards his family and the community. A man who touched so many will be dearly missed by his family and the friends made throughout his lifetime in the Moosehead Lake community and beyond. Ivon is survived by his loving wife of 59 years, Gail; four children, Ivon Jr. and his wife, Ann, of Hermon, Maria Haefele and her husband, David, of Greene, Gina Fuller and her significant other, Lester Herow, of Millbrook, NY, and Karla Gagnon and her husband, Kevin, of Raymond; sister, Julie Lawyerson; 10 grandchildren; 8 great-grandchildren; and many nieces and nephews. He was predeceased by his siblings Helon, Eleanor, Leon and Franklin. Memorial visitations will be held 1-4PM Sunday, September 19, 2021, at the Lary Funeral Home Greenville Chapel located in the Greenville Masonic Lodge, 281 Pritham Avenue. A Mass of Christian Burial will be held on 10AM Monday, at the Holy Family Catholic Church, Greenville. Immediately after the Mass a graveside committal with military honors will be held at the St. Joseph Cemetery, Rockwood. In lieu of flowers, donations can be made in his memory to Holy Family Catholic Church, Building Fund, P.O. Box 457, Greenville, ME 04441, or to the American Legion Post #94, P.O. Box 1222, Greenville, ME 04441. Arrangements are in the care of the Lary Funeral Home. Messages of condolence and memories may be expressed at www.laryfuneralhome.com.