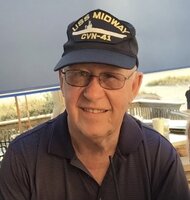 Holden - Senior Chief Petty Officer Phillip J. Bullard, U.S. Navy (Retired), of Holden, passed away on August 23, 2021, at the age of 83, following a long battle with Parkinson’s Disease. Bullard was born in Guilford on June 4, 1938. He graduated from Piscataquis Community High School in Guilford in 1957, worked temporarily for Guilford Woolen Mills, then enlisted in the U.S. Navy in September 1957, rising over a 21-year career to the rank of Senior Chief Petty Officer. Following retirement from the Navy, he became a businessman in the Greater Bangor Area and owned Systems Management Services, a business specializing in printing supplies. He is survived by his wife of 62 years, Mary Jane (Zimmerman) Bullard and their four sons, Brigadier General Steven (and Janice) Bullard, U.S. Air Force (Retired), of Crestwood, Kentucky; Gregory Bullard of Stockton Springs; Stuart Bullard (and Lisa) of Bangor; and Robert Bullard (and Laurie Cyr) of Bangor; his brother, Jay Bullard, of Caribou; and his sister, Linda (and David) Webster, of Hermon. Additionally, he is survived by 12 grandchildren – Meghan, Bridget, Daniel (and Jordan), Tim (and Kristen), Matt, Alex, Adam (and Kate), Josh, Samantha, Rebeka, Courtney and Allison Naumann; four great grandchild, Eva Jane Bullard and Cooper, Kayden and Ava Naumann; and in-laws, Bob Zimmerman of Abbot, and Suzanne (and Kent) Fortier of Sangerville. He was preceded in death by his father, Edwin Bullard, and mother, Marjorie Bullard, of Guilford, Maine. Bullard met the love of his life, Mary Jane, at Guilford High School. They married in March 1959 in Alameda, California, where he was serving on the aircraft carrier USS Midway (CVA41). A personnel specialist, he completed a Bachelor of Science degree with Golden Gate University (San Francisco) and went on to complete 21 years of service, rising to the rank of Senior Chief Petty Officer, and passing on a promotion to Master Chief Petty Officer (with an associated requirement to return to sea duty) to retire in Maine in 1978. His Navy career, of which he was very proud, included tours on the carriers Midway and USS Forrestal (CV59); the U.S. Naval Academy in Annapolis, Maryland; Naval Security Activity at Bremerhaven, West Germany; Naval Security Group Headquarters, Washington, DC; and multiple senior non-commissioned officer roles at Norfolk Naval Station and Oceana Naval Station (Virginia Beach), Virginia. Back in Maine, he and Jane purchased a home at Piper Pond in Abbot and another home in Bangor. He spent several years in sales before starting his own company, Systems Management Services, Inc. (SMS), in Bangor, a typewriter and printing supplies company serving many clients throughout the Greater Bangor Area, including the University of Maine, Champion International Paper and Eastern Maine Medical Center. He retired after 25 years to a life as a “snowbird,” spending 16 years sharing time between Maine and Brooksville, Florida, before settling in Hancock year-round. From 2000-2008, he and Jane served as co-chairs of the Guilford/Piscataquis Community High Schools’ annual reunion. He authored a series of three sequential fictional novels, “The Josh Kemper Adventure Series,” including Rage and Retribution, Ruthless Restitution and Ultimate Resolution. He was exceptionally proud of his sons and grandchildren. His son Steven graduated from the University of Maine in 1984 with a degree in journalism and was a local free-lance writer before joining the Air Force as a C-130 aircraft navigator, rising to the rank of Brigadier General in the Kentucky Air National Guard and serving in numerous leadership roles. He currently serves in the Cabinet of Kentucky Governor Andy Beshear as executive director of the Kentucky Commission on Military Affairs. His son Greg is a self-employed carpenter who works on homes along the Maine coast, and serves part-time as an Emergency Medical Technician in the Stockton Springs area. His son Stuart graduated from the University of Maine in 1985 with a degree in Economics and has had a long career with Shaw’s in Bangor and Ellsworth. His son Robert earned an Associate Degree from Eastern Maine Community College in Bangor and served as a sales manager (photography) at Sears Roebuck before starting his own successful business fitting hearing aids with Miracle Ear. His grandchildren are also well on their way to successful careers in numerous fields. Funeral services with military honors will be conducted 2:00 p.m. Tuesday, August 31, 2021, at the Lary Funeral Home, Dover-Foxcroft, with visitations beginning at 1:00 p.m. The family asks that all attendees follow CDC guidelines. Following cremation, burial will be in the family lot in Lawn Cemetery, Guilford. In lieu of flowers, memorial contributions may be made to the Parkinson’s Foundation New England Chapter, Attn: Donor Services, 200 SE 1st Street, Suite 800, Miami, FL 33131. Condolences may be expressed at www.laryfuneralhome.com.