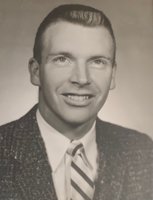 Dover-Foxcroft - Roger “Red” Evans Davis, passed away on August 6, 2021. He was born in Milo on October 14,1933, the son of Raymond and Pauline Hassell Davis of Sebec and Dover-Foxcroft, Maine. Roger will be remembered as a caring, generous, hard working person with a good sense of humor. He loved his “sweets” especially ice cream from Butterfields. Roger spent his first ten years living on the family farm in Sebec. After the home was destroyed by a fire, his family moved to North Street in Dover-Foxcroft where he lived for the rest of his life. The family continued to raise beef cattle and potatoes on the farm land. He graduated from Foxcroft Academy in 1952 where he excelled in cross-country, football, basketball, baseball and also played the trumpet in the band. He attended the University of Maine at Orono to major in education and played baseball. After his freshman year, he enlisted in the army for 2 years where he earned the rank of sergeant. Returning home he worked for the railroad in Derby until he could re-enroll at UMO. He continued to play for the UMO baseball team under Coach Jack Butterfield where he led the team in batting average for the 1957 season. Also, he was a member of the Phi Eta Kappa fraternity. When his father became ill, Roger returned home to continue the farm operations. In 1959 Roger began building a camp on Sebec Lake. Roger enjoyed summers on the lake with family and friends where special memories will live on with future generations. Roger married Deborah on August 4,1962 at the Methodist Church in Dover-Foxcroft. They had 3 children; Rae, Dean, and Mary. Roger was a great family man and a loving father. He worked for various construction companies as a carpenter and later would become a supervisor for the construction of many university buildings in Maine and local town buildings. Roger was a member of the Junior Chamber of Commerce and ran a men’s softball team called the AC’s. He was an avid fan of the Boston Red Sox and the New York Giants. Roger was hired as Superintendent of Building and Grounds at Foxcroft Academy, his second home, for thirty years. Roger enjoyed his job at FA and the Pony tradition all the while making sure the buildings and the athletic fields were ready for all events. He also assisted in building sets for music and drama productions. In 2011, Foxcroft Academy introduced the first Hall of Fame class. The following is part of Roger’s biography for his induction, “Roger Davis is truly a Foxcroft Academy icon. In addition to being a stellar athlete at FA in football, cross country, basketball, and baseball, a star baseball player at the University of Maine, and a valued coach and mentor at FA, one only needs to look around the Foxcroft Academy campus to see his biggest contribution to Pony athletics. Because of the vision and passion of Roger Davis, FA’s athletes now have the privilege of playing on the finest fields in the state.” Roger was very proud of Rae, Dean, and Mary and their accomplishments. He attended all their school and athletic events. Once his grandchildren were born, he and Deborah would travel all over Maine to attend their many various school and athletic events. He would make sure to wear Bulldog, Trojan, Ram, Golden Bears and Beaver attire for the event. Roger enjoyed assisting in many building and remodeling projects at his children’s homes. The grandchildren brought great joy and entertainment for Roger and he was a big part of their lives. Whenever he saw his grandchildren, a big smile would come across his face. “Grampy” taught them many lifelong activities including carpentry skills, shooting, water skiing and assisting them with their athletic skills. His favorite activities with his grandchildren were snowmobiling, spending time at camp, sharing his life experiences and stories of life on the farm. Roger is survived by his wife, Deborah, and their three children: Rae Spencer Davis-Folsom and her children, Spencer and Molly; Dean Evans Davis and wife, Teresa, and their children, Carter and Ryan; Mary Henderson Alexander and husband, Daniel, and their children, Jacob and Brady. In addition to his parents, Roger was predeceased by an infant brother, Jason; a sister-in-law, Rachel Henderson; and a son-in-law, David Folsom. The family would like to extend a special thank you to Beacon Hospice and Pine Tree Hospice. A celebration of Roger’s life will be held 1:00PM Friday, August 20, 2021, at the Dover-Foxcroft Congregational Church, 824 W. Main Street, Dover-Foxcroft. Following the service please attend a gathering for family and friends at Central Hall Commons, 152 E. Main Street, Dover-Foxcroft. In accordance with the current CDC guidelines, face masks are recommended for the service and at the gathering. In lieu of flowers, memorial donations may be made to the Foxcroft Academy Baseball Program, Foxcroft Academy, 975 West Main Street, Dover-Foxcroft, Maine 04426. Arrangements are in the care of the Lary Funeral Home. Condolences and memories may be expressed at www.laryfuneralhome.com.