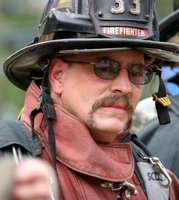 Robert Drouin was born January 2, 1969 in Hartford, Connecticut to Carol Malloy and Wilfred Drouin. He passed away unexpectedly in an ATV accident. He spent most of his lifetime in Lagrange and Brunswick Maine. Robert joined the West Bath Volunteer Fire Department in 1998 and ended his longtime career there as a Lieutenant. Apart from firefighting Rob was an avid outdoorsman who had a passion for hunting and fishing. Robert is survived by his four children, Chris Chubbuck, April Chubbuck, Makayla Drouin, and Carrigan Snyder; one grandson; brother, Jeff Drouin; sister, Mary Donlon; father, Wilfred Drouin; as well as many nieces and nephews. Robert will be greatly missed by all who knew him. Services for a Celebration of Life will be held at the West Bath Fire Department Hall at 192 State Rd in West Bath, ME on Sunday August 8th at 2:00 pm.